Russia must pay for its horrific crimes. The EU will work with the ICC and help set up a specialized court to try Russia’s crimes. With partners, the EU will make sure that Russia pays for the devastation it caused, with the frozen funds of oligarchs and assets of its central bank – according to von der Leyen.

Unfortunately, von der Leyen made a severe mistake during this vital speech, which Russian propagandists used. She said that according to some estimates, about 20,000 civilians and “about 100,000 military officers” died due to the attack on Ukraine.

According to available data, there are now about 700,000 people in the Armed Forces of Ukraine. At a ratio of 1 to 10, this is approximately 70,000 officers. That is, the figure for losses announced by Von Leyen is unrealistic. The president’s office understood that, so the tweet with the first version of the video was deleted, and a new one appeared instead, with a video that did not mention losses.

Where could the figure of 100,000 casualties come from? Most likely, the traces lead to the statement of the chairman of the USA Joint Chiefs of Staff, gen. Mark Milley, which he made on November 10. At a conference hosted by the Economic Club of New York, Milley said more than 100,000 Russian soldiers have been killed or wounded in the war.

He added that the number of troop casualties was probably the “same” for Ukraine’s army.

This is how the probable losses of 100,000 dead and wounded turned into ‘100,000 dead officers‘ in von der Leyen’s speech. The president of the EU Commission is a great friend of Ukraine; it is a shame that one of her speechwriters made such a gross mistake. Although the video was quickly deleted, there is no doubt that the original version will be used by Russian propaganda as evidence of the “huge losses” of the Armed Forces of Ukraine. 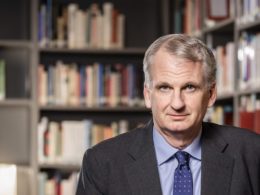