Russian matryoshka doll. How the Kremlin modernized its army with Western components despite sanctions

Despite the sanctions imposed in 2014, Ukrainian soldiers find European components with date stamps as recently as 2022 in the shot-down Russian military equipment. Here is why the Russian military products are Russian-made only on paper.

In 2014, Russia annexed Crimea and started a war in eastern Ukraine. In response, Western countries imposed sanctions against the aggressor, including an arms supplies embargo. However, the sanctions did not apply to dual-use equipment, which was supposed to be supplied for civilian use. And the suppliers were not checking if a civilian company is just an outer matryoshka doll inside which the Russian military-industrial complex is hidden from the sight.

Also, the embargo did not affect contracts concluded before the Russian aggression in 2014. This created a loophole that allowed western companies to circumvent the sanctions on Russia.

Electronics have always been Russia’s major weakness. But Western components helped to fix that. According to The Telegraph, France and Germany have armed Russia for the amount of €273 million since the imposition of sanctions. But they were not alone: companies of ten EU countries have supplied Russia with military equipment worth €350 million. These weapons are being used to kill Ukrainians now.

For example, German companies sold “dual-use” equipment to Moscow for €121 million. Berlin cynically defended the introduction of this loophole in the embargo in 2014.

France has sent €152 million worth of weaponry to Russia under 76 export licenses granted by the French government. France supplied Russia not only with components but also with missiles and torpedoes. Also, French companies have modernized more than 1,000 tanks of the Russian Federation with thermal imagers. Special Matis STD camcorders manufactured by Safran were intended for the main type of Russian T-72 tanks allowing for its deep modernization into T-90 and new T-80BVM.

The French company Thales has equipped TACAN navigation systems with 60 two-pilot Su-30 multipurpose fighters. Russian fighters also received Safran-designed Sigma 95N navigation systems that allow autonomous navigation without satellite signals. Target detection systems were also intended for Ka-52 helicopters. French and American equipment is found in the wreckage of Russian K-52 helicopters, including Burr-Brown electronics. This suggests that these are not only the EU companies that have been bypassing sanctions.

Russian propagandists have been talking for years about the power of their military-industrial complex but in fact, most of its new pieces of equipment that have no comparable equipment in the West, do have components from the West. These are engines, sights, navigators, guidance systems, thermal imagers, etc.

In particular, Russian “Tigr” armored vehicles have equipment from the German company Bosch under the hood. Russian Orlan-10 drones are equipped with French Lynred thermal imagers.

Russia has also fitted out its equipment and infantry with thermal imagers manufactured by the aforementioned companies Thales (contract since 2007) and Safran (since 2013). The French continued to fulfill the old contracts and stopped deliveries only in 2020.

The sanctions were imposed on KamAZ, which manufactures military trucks and tractors for the Pantsir-C1 SAM. As it turned out, even military models are equipped with American Cummnis engines, a German ZF gearbox and Bosch fuel equipment.

For years, most countries had a modern military doctrine that ruled out direct war between countries, while the military was seen as a means of fighting insurgents or terrorists.

Because of this worldview, the West turned a blind eye to Russia’s war crimes, as Russia was formally fighting ISIS in Syria, and the war in eastern Ukraine was called a “crisis.” However, the reality was different. The West must completely cut off supplies of weapons and equipment to Russia, as it is still living in colonial wars and practicing wars of aggression and bullying the West. 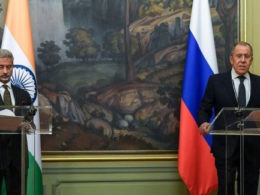